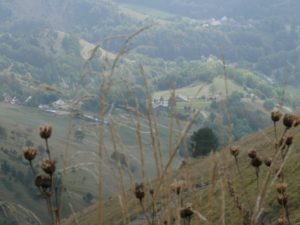 Les Ablandins, the hamlet where Melanie and Maximim began their epic journey to graze their cows on Mount Gargas.

“Come closer, my children; do not be afraid. I am here to tell you great news!”

On Saturday, September 19, 1846, two shepherds, a boy and a girl, each urging on their four cows, climb the barren slopes that rise above the village of La Salette.  La Salette was an unknown hamlet lost in one of those giant crevices of the French Alps.  After an uneventful morning, they meet within this solitude a woman more beautiful than creation; she appears within a light that is brighter than the sun.

The story told by Maximin Giraud, age 11, and Melanie Calvat, age 14, traveled everywhere and profoundly touched a world in need of reconciliation. To all who are or should be thirsting for justice, it points to the Gospel fount of living water. Here is the story the children told the World. 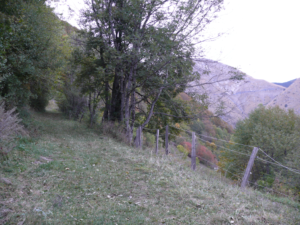 Early on September 19, 1846, the two children climbed the slopes of Mount Sous-Les-Baisses, each urging four cows up the mountain. Besides his own flock, Maximin had a goat and his dog Loulou. Sunlight flooded the Alpine slopes. Far down the mountain the Angelus bell rang out from the village church. This signaled the shepherds to lead their cows toward the “animal spring,” a small pool formed by the brook as it tumbled down the Sezia ravine. Then they goaded the cows toward an adjoining field on the slopes of Mount Gargas. The animals grazed quietly in the hot sun.

The path that Melanie and Maximim
traveled with their animals and the story!

Contrary to their habits, the two children lay down on the grass and fell asleep. The September sun was relaxing and the sky was cloudless. The chattering brook highlighted the mountain stillness. These were quiet moments. Melanie woke up with a start and shook Maximin! “Mémin, Mémin, get up!  Let us find our cows. I don’t know where they are!” 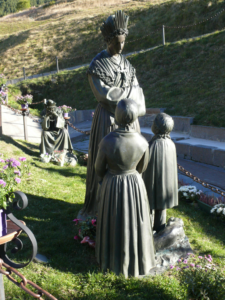 Quickly they climbed the hillock facing Mount Gargas. From that vantage point they could see the surrounding area, and the cows right there, grazing peacefully. The two children were relieved. Melanie took a few steps down the hillock. Halfway she froze, stunned, and let her shepherd’s stick fall. “Memin, look over there, a light!”

Near the small brook on one of those stone benches there was a globe of fire. “lt’s as if the sun had fallen there!” But the sun shone in a crystal clear sky. Maximin ran to Mélanie’s side yelling, “Where is it? Where is it?” Melanie, nearly frozen with fear, pointed to the bottom of the ravine where they had just rested. Maximin approached her and said, “Hold on to your stick! I’m keeping mine and if it comes close I’ll give it a good whack!”   The light stirred, moved and swirled. Words failed the children to describe the rush of light that streamed from the fiery globe. A woman appeared within the light. She was sitting, her head in her hands, her elbows on her knees, in deepest grief.

Mary and the children next to the
spring that still flows today. 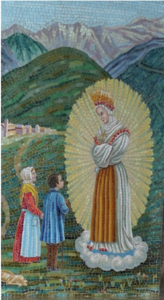 The Lady rose slowly. The children had not moved. She spoke to them in French; “Come near, my children, do not be afraid. I am here to tell you great news.”  They approached the Lady. They stared at her. She was still crying. “She seemed like a woman whose children had beaten her and who had run away into the mountains to cry.” The Beautiful Lady was tall. She was all light. She was dressed like the women of that region: a long dress, a long apron tied at the waist, a shawl crossed and knotted in the back. On her head she wore a peasant bonnet. Roses formed a crown around her head and outlined the fringes of her shawl and shoes. Light shimmered like a fiery diadem on her forehead. A chain seemed to weigh heavily on her shoulders. A finer chain held a brilliant crucifix on her breast, with a hammer on one side and pincers on the other.

The Beautiful Lady spoke to the two shepherds. “She wept all the while she spoke to us,” said Maximin and Melanie later.

If my people do not obey, I shall be compelled to let go my Son’s arm. It is so heavy, I can no longer hold it. How long have I suffered for you! If my Son is not to abandon you, I am obliged to entreat Him without ceasing. But you take no heed of that. No matter how well you pray in the future, no matter how well you act, you will never be able to make up to me what I have endured on your behalf. I have given you six days to work. The seventh I have reserved for myself, yet no one will give it to me. This is what causes the weight of my Sons arm to be so heavy. The cart drivers cannot swear without bringing in my Sons name. 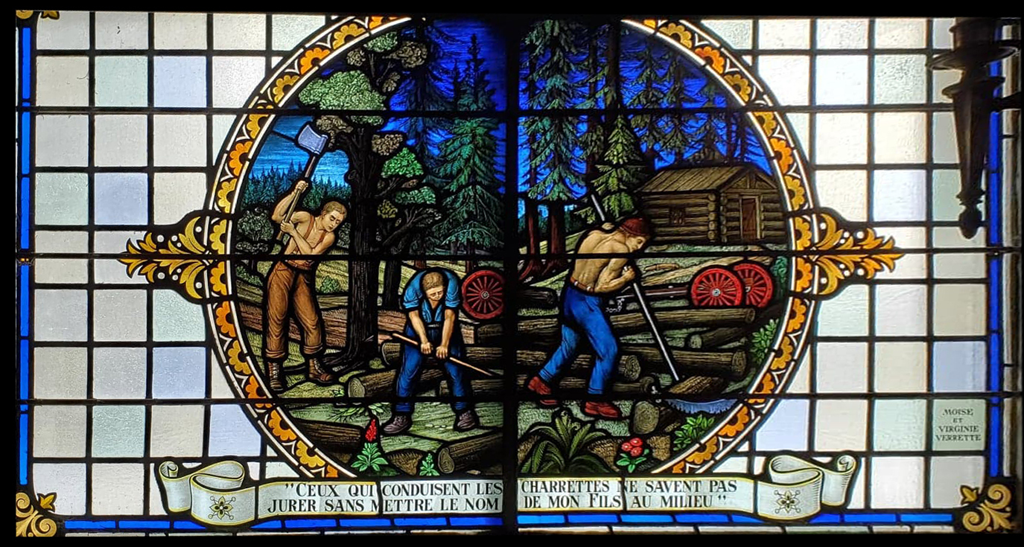 These are the two things that make my Son’s arm so heavy. If the harvest is spoiled, it is your own fault. I warned you last year by means of the potatoes. You paid no heed. Quite the contrary when you discovered that the potatoes had rotted, you swore, you abused my Son’s name. They will continue to be spoiled, and by Christmas time this year there will be none left. 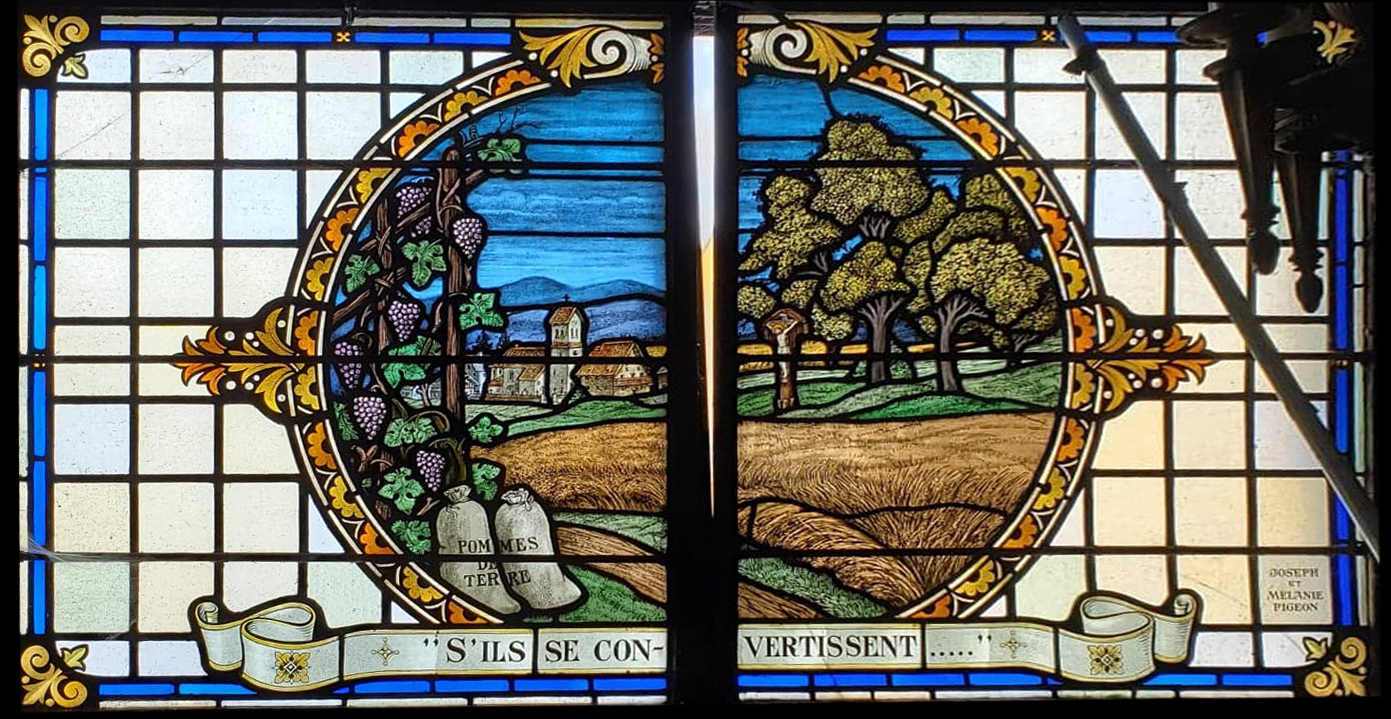 The French word potatoes (pommes de terre) puzzled Melanie. For her, the word “pommes” brought to mind “apples.” She turned to Maximin for help. But the Lady said;  Ah! You do not understand (French), my children? Well then, listen. I shall say it differently.

Changing to the local dialect, she repeated these last sentences, and continued speaking to Maximin and Melanie:

If you have wheat, it will do no good to sow it, for what you sow the vermin will eat, and whatever part of it that springs up will crumble into dust when you thresh it.

A great famine is coming. But before that happens, children under seven years of age will be seized with trembling and die in the arms of those holding them. The others will pay for their sins by hunger. The grapes will rot, and the walnuts will become worm-eaten.

Suddenly Melanie no longer heard the Lady’s voice although her lips were still moving. She noticed that Maximin was listening very attentively. Then she, in turn, was able to hear words that Maximin could not hear.  She said something to me and told me not repeat what she told me.  Maximin’s native restlessness won out over his effort to behave. He toyed with his hat, taking it off, putting it on again, and with the tip of his walking stick he poked at pebbles.

Finally, they both heard the Lady’s voice again:  Do you pray well my children? Both children responded, not very well. It is very important to do so, at night and in the morning. When you don ‘t have time, say at least an “Our Father” and a “Hail Mary,” and whenever you can, say more. She continued, Only a few rather elderly women go to Mass in the summer. Everyone else works every Sunday all summer long. And in winter, when they don’t know what else to do, they go to Mass only to scoff at religion. During Lent, they go to the butcher shop like dogs.

Have you ever seen spoiled wheat, my children? “No Madame,” declared Maximin, quick to speak for Melanie as well as for himself.  Turning toward Maximin, the Lady insisted: 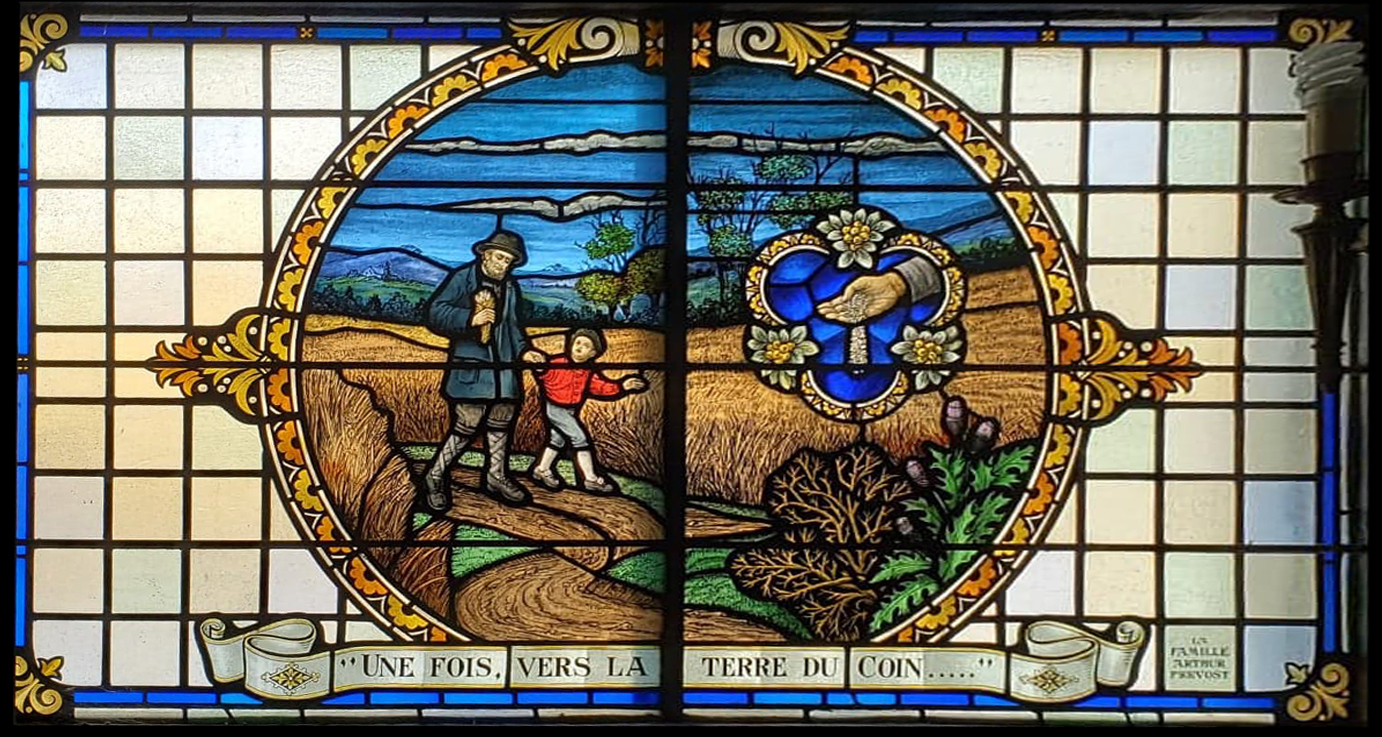 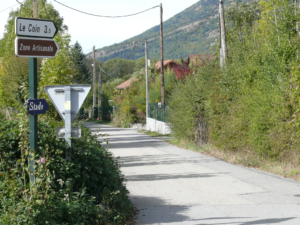 On the road to Coin with Papa!

But you, my child, must have seen some once near Coin with your papa. The owner of the field said to your papa, “Come and see my spoiled wheat.” The two of you went. You took two or three ears of wheat into your hands. You rubbed them together and they crumbled to dust. Then you came back from Coin. When you were only a half-hour away from Corps, your papa gave you a bit of bread and said: “Here, my son, eat some bread, this year anyhow. l don ’t know who will be eating any next year if the wheat continues to spoil like this.” “Oh! Yes, Madame, now I remember. Until now I didn’t,” admitted Maximin.

The Beautiful Lady concluded, no longer in dialect but once again in French.  She began to walk and Maximin stepped aside to let her by. The Lady crossed the brook and climbed the little hillock. Without turning toward them, she repeated, Now, my children, you will make this known to all my people. 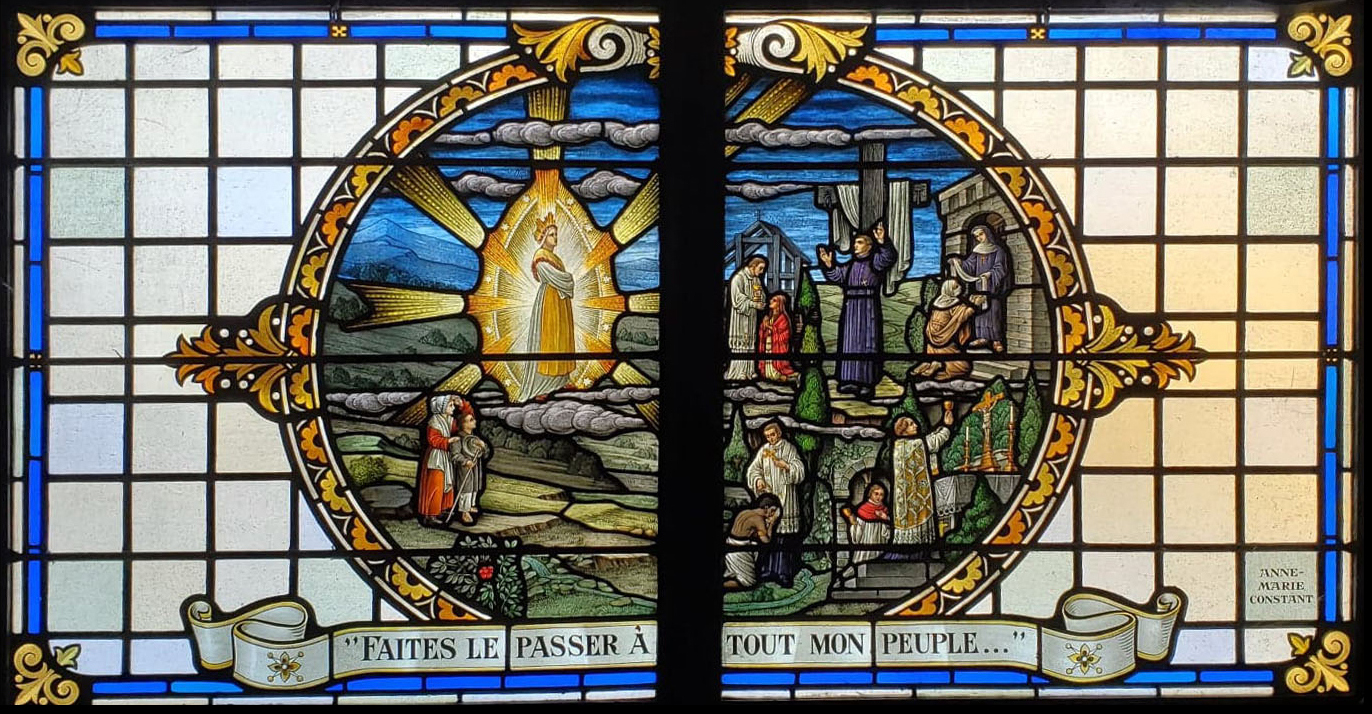 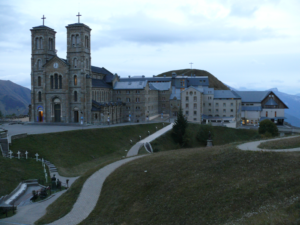 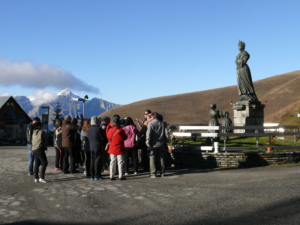 All had been said. The Lady climbed the narrow path that led out of the ravine. Reaching the top, she rose about five feet into the air. The children ran after her and reached the spot where she had risen above the ground. The Lady looked toward heaven, and then gazed down to the southeast. She repeated, Now, my children, you will make this known to all my people. 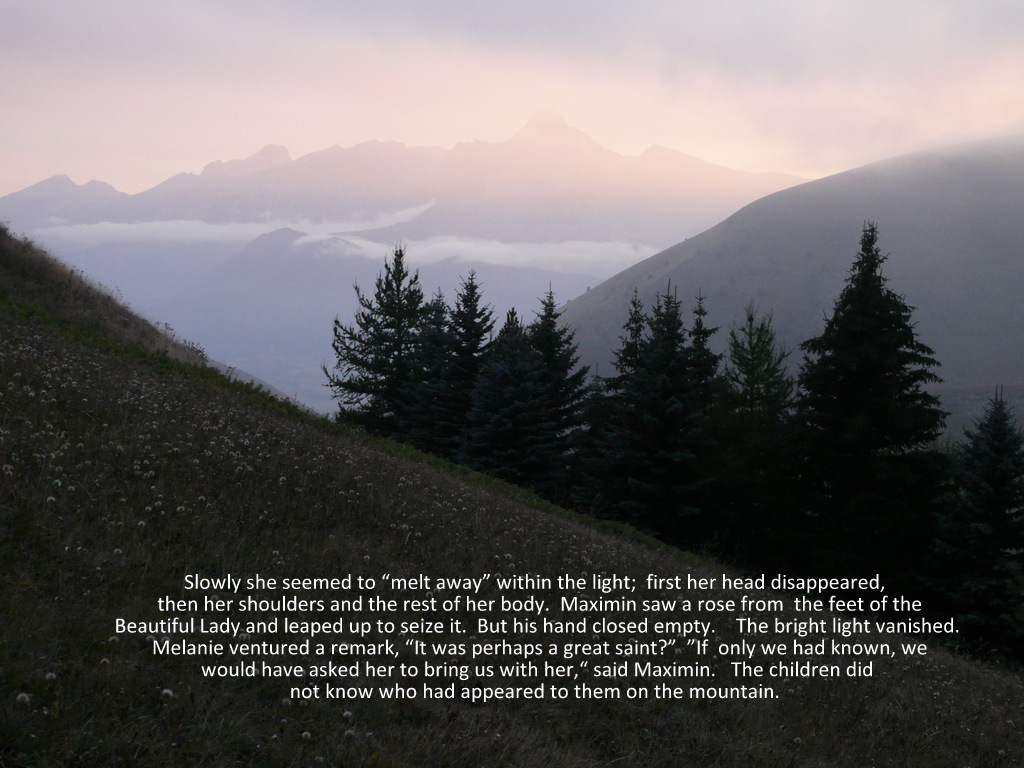 On September 19, 1851, Bishop Philibert de Bruillard, after much investigation and interview with the children, issued his “doctrinal pronouncement.” It’s basic message is the following:

“We judge that the Apparition of the Blessed Virgin to two shepherds on September 19, 1846, on a mountain of the Alpine chain, situated in the parish of La Salette, of the deanery of Corps, has all the characteristics of truth, and that the faithful have grounds for believing it to be undeniable and certain.”